Narrated by author, Tom North, the audio book is a compelling rendition of the dramatic true story. Engaging and enlightening, Tom’s narration transports listeners back to the 1960′s, a time of counterculture and revolution.

Only Tom could express the devastation he and his North siblings felt as young children when their father (Dick North) died, and the despair living through the years of their mother’s (Helen North’s) marriage to Frank Beardsley. (Unfortunately, Beardsley was violent and a child molester. How could any child adjust from a loving, idyllic home to a version of living hell?) When the movie, “Yours, Mine and Ours” came out, adding insult to injury, the youngsters were forever living it down – they were thought to be a famous, successful, prosperous and happy family – it was so far from the truth.

Tom shares his adventures in nature and what turned out to be his redemption later in life, his experiences at Maharishi International University (now Maharishi University of Management) and Transcendental Meditation. He takes the listener on a roller coaster ride of emotions as he leads his family members through intense therapy and healing sessions,  and opens a path to forgiveness and light.

Especially poignant is the chapter where the North family gathers at their mother’s grave and spills out words and feelings that were unsaid and unexpressed for so many years.  North remarks, We vowed once again to never promote the lie that the movie “Yours, Mine and Ours” portrayed about our ‘big happy family’.”

He was finally home, and he tells how shortly after, he changed his name back from the adopted, shameful name “Tommy Beardsley”, to the truth of who he is, Tom North. 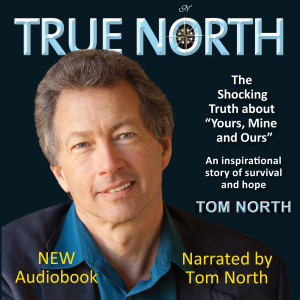