Meditation saved my life. It was and still is a vital therapy for my continued survival and healing from a life of child abuse and domestic violence. I meditate twice a day, every day.

In about January of this year, I began to notice streams of energy flowing through my body during my daily meditation and at odd times during the day with almost daily regularity.  I’d be sitting at my desk at work and physically feel waves of bliss coursing through my entire body. This was so enjoyable that I’d just close my eyes and be with the bliss, marveling at the simplicity and consumed by a profound sense of wonder at it.

These experiences left me with a curiosity about who else may be having this in-pouring of Divine Grace. It occurred to me that I couldn’t be the only person to be experiencing this phenomenon.  There are millions of people who have been culturing spiritual awareness in their lives through their own meditation practice.  Surely they are having this or some similar experience as a result of regularly plugging in to the same cosmic source of Divine Energy that I am.

New Waves of Bliss and Energy Enter the Collective Consciousness 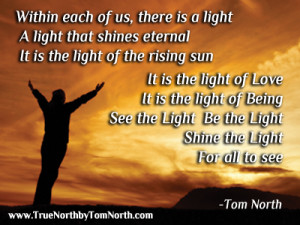 Within each of us there is a light… -Tom North

Meditation is indeed a powerful tool for health and healing and research shows that group meditation can produce a radiating influence of peace in society.

I began to conduct a poll of people I know who have a mediation practice of some kind or another.  I asked them what their physical, energetic experience has been lately, and explained to them why I was asking.  I reminded them that we are all part of the collective consciousness of humanity and therefore might be having a shared experience, much like musicians do either individually or in a band or orchestra; playing our own instrument, but part of the greater melody.

The response I received was overwhelmingly positive.  Meditator after meditator confirmed my suspicions.  Each of them is having these same waves of bliss, regardless of their style of practice.  I queried people who practice Transcendental Meditation as I do.  I asked those who have a Zen practice or use contemplative methods of introspection. The same response came from each of them.  They were all pleased to have been asked and given an opportunity to articulate their experience and validate it as well.

One particular meditator, an Emergency Room doctor who practices a Buddhist form of meditation, smiled at me when asked this question and said, “Oh, but there’s more going on than you might think, Tom, and it isn’t just happening for those who practice some form of meditation!”  He then went on to tell me that he often takes the ER graveyard shift at the hospital where he works.  People are coming in to the ER late at night, complaining of strange energy coursing through their bodies unannounced and unwanted.  They can’t identify it and think there is something wrong with them.  They ask for medication to help reduce or remove this energy.  As a medical doctor, my friend is required to do a battery of tests on patients, and so he does.  Invariably, the tests come up negative.  He tells these people that there is nothing wrong with them, and listens patiently, “holding space” for each one them as they talk. After a time, they comment that they feel better and are going home now, thank you very much. If these late night ER visitors had a means of looking inward and monitoring their own energetic pulses and rhythms, they would have an opportunity to notice and understand variations and tune into changes as they occur. They could then appreciate the miracle that is happening to them!

From my very informal poll, I am observing that the collective consciousness of humanity is evolving in ways we do not yet completely understand.  The implications are exciting and are reflective of major changes in the way we as human beings function, individually and as a species.

The benefits of meditation are many and varied, and affect every level of life, not the least of which is appreciating the magic of life itself.