We can Stop the Perpetuation of Child Abuse and Domestic Violence

An old classmate of mine from Maharishi University of Management, (which I still like to call MIU) has been following my blogs and the articles that have been written about my book, True North – The Shocking Truth about “Yours, Mine and Ours”.  In a recent email conversation, he sent me an obituary that has been circulating on the internet.  The obit was written about a woman in Nevada who passed away recently, leaving her children angry and bitter.  According to the obituary, she had been extremely violently abusive to her children, and they wrote about her in the most unflattering and resentful terms.  Her passing was a relief to them all. 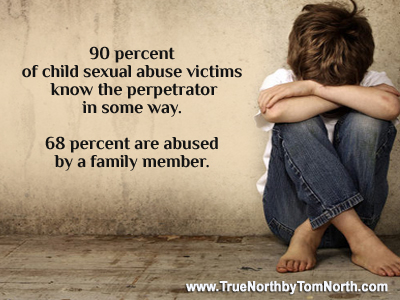 My college friend added an editorial comment that I found of value and I wanted to share it because it seemed so simple on its surface, but is far more profound in its implications.  He said that as a child, his parents had spanked him regularly, and they had tried to convince him that the spankings were good for him and that it was his fault that they had to spank him. He followed with an expression of wonder at this and said, “I can’t imagine ever hitting a child for any reason!”

While I agree with my friend, and have never hit either of my daughters, the dynamics of parental abuse of their children are more complicated than we might like to acknowledge or perhaps wish they were.  When my daughter Diana, who is now 26, was just a toddler, an event occurred that illustrates how challenging it can be to be a parent and manage all the responsibilities and relationships in a family. At the same time we attempt to integrate the behavioral programming we received as children and respond to without even knowing it.  Let me give you an example from Chapter 26 of True North – The Shocking Truth about “Yours, Mine and Ours”.

I had been enjoying a typical evening at home with Connie and our daughter Diana, then eighteen months old.  We had finished dinner.  Connie then nursed the baby while I got up and did the dishes.  Putting the pots and lids on the counter after drying them, I watched as Diana stopped nursing, slid off Connie’s lap and waddled toward me, smiling.  She reached up and on her tiptoes, grabbed a pot lid and slid it off the counter.  She rocked back and forth on her tiny legs a bit to catch her balance.  As she did so, an angry voice in my head yelled at me, “Hit her!  Beat her!  She could hurt herself doing that!  Punish that child!  Smack her right now!”

In my mind and in my heart, I knew this was the voice of Frank.  The violent programming that I didn’t even know was in me had been activated by this simple act of a child.  Fortunately, my years of meditation had given me the ability to distance myself from any impulse to follow these horrific instructions. I thought to myself, Leave her alone.  Watch her and see what she does.

Diana turned around and walked to the lower cupboard across from the sink.  With one hand, she opened the cupboard, balancing the pot lid on her head with the other.  She put the pot lid away, closed the cupboard and turned around, smiling broadly at her accomplishment.  She had wanted to help her daddy with the dishes.  I picked her up and hugged her and kissed her chubby little cheeks.  I told her what a good girl she was and we laughed together.

Amazed, I turned to Connie and told her what had happened inside my head.  We marveled at the time bomb that had been planted so many years earlier and had just gone off.  Fortunately, it did no harm.  Had I responded to the negative programming that I could only associate with Frank Beardsley, I could have destroyed any desire my daughter might ever have of being helpful.  Had I followed the errant software that had been written in my mind, I could have done the same kind of damage…

Based on my experience of having that errant software triggered in my brain by a simple act of a child, I have to believe that I am not alone in having had that event or similar ones occur in a parental context.  I believe we are all programmed by our parents or those whom we were influenced by in our early years to react in unconscious ways that often have damaging consequences for our children and unfortunately for generations to come.

As much as some people would like to believe that domestic violence and child abuse are either rare or non-existent in our society, they are far more present than absent in American homes. The only way we are going to reduce the incidence of this plague on our children is to raise awareness on a national scale, and to educate parents.

To help draw attention to this important issue and to help children who are already victims of abuse and violence, I have partnered with National CASA (Court Appointed Special Advocates) For Children.  With hundreds of chapters all over the country, we have the opportunity to increase public awareness and help people understand just how critical this is for the future of our children, our families, communities and our nation. We are making a difference in the lives of children – lifting them up and giving them hope.

Children are waiting. When we can reach a child in need, his or her life changes for the better. You can help.

And for those who find themselves at the effect of negative preprogramming, please get help and break the perpetuation of child abuse and domestic violence.