THE SAD TRUTH – For Many, Father’s Day Means Coming to Terms with Feelings of Guilt and Shame

My father, Richard North, died in a Navy jet test flight crash when I was six years old.  He was my hero. Fifteen months after his death, my mother, Helen North who had eight children, re-married a man named Frank Beardsley who had ten, making us one of the largest families in the country. We became famous, and our story was featured in the movie, “Yours, Mine and Ours”. But it wasn’t one big happy family. We had to hide the fact that we were living a lie.

I was seldom comfortable around Frank Beardsley and never thought of him as my father even though I was required to address him as such or be punished. The Frank Beardsley I lived with was not the same man that Henry Fonda portrayed in the film. The movie character was kind, wise, rational and understanding. He was someone I could have willingly honored on Father’s Day! But the real Frank Beardsley was everything the fictional one was not. His violence and abuse created a life of intimidation, turmoil, fear and depression for me and my siblings. 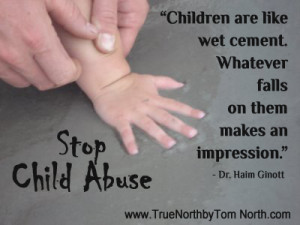 On what might have been a wonderful day of celebration, I was filled with rage at the unfairness being forced to pay tribute to a man who was, in my mind, the opposite of everything that Father’s Day stood for. This dilemma presented difficult questions that, at the time, I had no answers to: “Why are we smiling at this man who terrorizes us every day? Why did my mother marry this man and take her children into a dangerous environment? Why don’t the adults in my family do something to get rid of this evil man?” My mother protected the image of the perfect family at all costs. She made efforts to reinforce her public image of him on Father’s Day by encouraging the children to write cards for him, but I don’t recall ever having participated. I felt guilty and ashamed.

Unfortunately, in households which are plagued with violence and abuse, too many children are faced with the additional burden of guilt and shame by the expectation to respect and honor a man on Father’s Day who is loathed and feared.

It seems I’ve been trying to come terms with this matter most of my life. As I write near the end of my book, during the last of the family therapy sessions, after his moment of apology when Frank admitted that he was guilty and had indeed abused his children, I realized I had to forgive him – not so much for his sake, but for my own healing and survival. I’ve found that this healing process never ends.

There is hope. Recently, I spoke at a Rotary Club meeting where many of the male members told me that they’d had a similar experience and how they made a conscious decision to break the cycle of violence and abuse with their own children. Not long ago, a reader sent me a message that said, “Thank you for writing your book. I now have a better understanding of my relationship with my own father”.

I am proud to be a father and I am honored and humbled to be loved by my children and my wife. Even though I learned how to create a positive and healthy environment for my family and children, Father’s Day is a day of enormous contrast for me. I can’t help but think of the pain and suffering I lived through and remember that along with child abuse survivors like me, there are families and children who are faced with similar, dreadful circumstances every day.

I’m grateful that my true story of survival and hope is touching many, and inspiring them to follow their healing path as they come to terms with their feelings of guilt and shame that surround their relationship with their fathers.

Here are some resources to help:
Breakthrough for Men
Learn How to Meditate
National Association of Adult Survivors of Child Abuse