Tom North, award-winning author of True North – The Shocking Truth about “Yours, Mine and Ours”
was a special guest on ABC KTVO’s “Good Morning Heartland” with Kate Allt.

Here is an excerpt from the story:

Tom North is one member of the family who inspired the 1968 movie “Yours, Mine, Ours” that starred Lucille Ball. North’s mother, Helen, was widowed at age 30 with eight children. Helen married Frank Beardsley, a father of ten. While the story of “Yours, Mine, Ours” is a charming one of two big, happy families becoming one bigger, happier family, North’s book, “True North: The Shocking Truth about ‘Yours, Mine, Ours’” reveals that couldn’t be further from the truth.

In the book, North describes violence and abuse that the children endured on behalf of their step-father, Frank Beardsley.

North said he decided to write the book because his family’s story needed to be told. It also addresses issues that many can relate to and connect with.

“It was not uncommon for them to come back and say, ‘based on what you shared with me, I went and addressed issues in my own life and I got resolution, so thank you for sharing that with me’,” North said. ”And I realized that this story was helping people, and I thought, I should write a book and maybe there’s a broader audience for this. And it turns out, there is.” 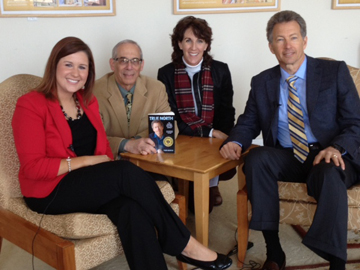 North said the abuse he endured during childhood made him withdrawn and angry as a young man. It wasn’t until he began to practice Transcendental Meditation that he felt a weight lifted off his shoulders.

“People began to notice that [change] and say, ‘something is different about you’,” North said. “I would say, ‘well, I began to practice TM’. And they said, ‘whatever you’re doing, keep doing it’. So that’s been a huge, huge improvement in my life.”

North encouraged anyone who has suffered abuse or violence to seek help, whether it be through a practice like Transcendental Meditation, or through the many organizations with resources and help available, such as National CASA.

“There is help, people can get help,” North said. “Please seek help. Do not think you can handle this on your own. One of the reasons I wrote the book is my mother thought that she could handle this on her own and she did not do a good job. It’s impossible to handle that.”