Tom North, award-winning author of True North – The Shocking Truth about “Yours, Mine and Ours” ,
will tell true story about the seemingly perfect movie family -
a story about domestic violence and child abuse and his journey of survival and hope.

After years of struggling with the decision about whether or not to tell his true story of growing up in the family made famous by a hit movie, award-winning author, Tom North, gathered the courage to write his book, True North – The Shocking Truth about “Yours, Mine and Ours”. North will make a special appearance at Revelations Book Store, 112 N. Main Street, Fairfield, Iowa, on Saturday, March 15, 2014, at 1:30 PM for a presentation and book signing. 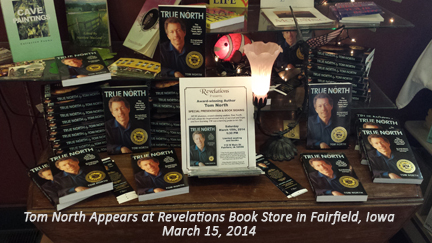 North explains: “The 1968 movie was a huge box office success and the public bought into the fictional story of one big happy family with 20 kids. The real-life family was the complete opposite – everyday life was wracked with abuse, fear and intimidation. Even Lucille Ball, who played my mother, Helen North Beardsley, saw right through my stepfather, Frank Beardsley. In the book I tell how Lucy came to visit us to learn as much as she could about our family. The local community fervently bought into the fictional story and assumed that we were all happy and wealthy – this proved to be an additional burden because we couldn’t tell anyone the truth – we were living a lie.”

The book is an inspirational story of survival and hope and chronicles North’s journey through drugs and despair to healing. In the 1970s he attended Maharishi University of Management (at that time it was Maharishi International University) and credits his experiences there and learning Transcendental Meditation (TM) with his survival. North states, “It is important to note a recent NIH study reports that children who grow up in an environment of abuse and violence are at an increased risk of serious disease as adults. We need to find the courage to face the past, our fears and feelings of rejection and shame. There is help and hope, and people need to seek therapy – it is really a day by day process which continues for me, even today. As I write in my book, I led my own family into counseling – we were all a mess in some way – and many of us still are. But, after my mother died in 2000, the North children decided to never again live the lie that was ‘Yours, Mine and Ours’.”

Hundreds of scientific studies have been conducted on the benefits of the Transcendental Meditation program at more than 200 independent universities and research institutions worldwide over the past 40 years. TM is an evidence-based, alternative therapy shown to heal and empower victims of abuse.

True North – The Shocking Truth about “Yours, Mine and Ours” has won a Living Now Award Gold Medal, is Recommended Reading by the Washington Times, has garnered rave reviews by Writer’s Digest and Independent Publisher Magazine, and  is an Amazon Best Seller.

Tom North appears on radio and television programs, and is a keynote speaker at colleges, universities and conferences. He is an Official Supporter of National CASA for Children.

The Maharishi University of Management is located in Fairfield, Iowa. www.MUM.edu

To book an interview or appearance with Tom North, contact Marketing@TrueNorthbyTomNorth.com