Recently, an art exhibit of the work of John Lennon visited the Carmel Plaza in Carmel-by-the-Sea, California. The title of the exhibit is “All You Need Is Love.” Interestingly, a film of the same name was shown on cable television the same week. A European film, it stars Pierce Brosnan as an embittered widowed businessman whose wife was killed by a drunk driver. He meets a Danish woman recovering from cancer (and her unfaithful dolt of a husband), whose daughter is betrothed to Brosnan’s character’s son. Leading up to the wedding, they embark on a love affair, learning to overcome their emotional wounds and get on with life. 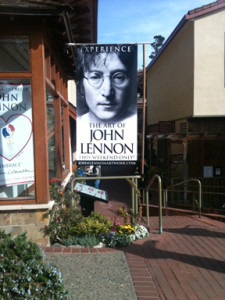 The theme of “All You Need Is Love” is inspirational, whether in the context of the art exhibit or in the film. In an unbounded expression of creativity, John Lennon inspired listeners of his music and viewers of his art to find their own personal power.

The film by the same name as the art exhibit inspires viewers to deal with their pain in whatever manner they can, as the characters in the film have done, and get past the anger and disappointment of loss, for beyond the pain is love.

What a wonderful message! The most challenging part of getting in touch with our own creativity and finding out that all we need is love, is overcoming our emotional wounds which is really not as easy as wishing it were so. Each and every one of us who is still on the path to realization has emotional charges attached to memories that are stored deep in our sub-conscious. When we are presented with opportunities to be happy or to move forward in some meaningful way toward our own fulfillment in life, it is common for our thought process to run that opportunity by our wounded inner-child. It is that hurt child bringing up an unresolved issue who may very well say, “No! I’m not ready to let go of that memory or that pain,” or whatever might be the emotional charge still buried deep within the psyche.

Commonly, we don’t even have an awareness that there is something to be dealt with. We just find a way to unconsciously sabotage ourselves so that we don’t have to look inside at our own process.

I had this experience not long ago. I have observed over many years that my relationships with men have been less than satisfactory. Until recently I have kept up my barriers to genuine closeness. I was always on guard. Suffice it to say that I suspected I was sabotaging myself, because I wasn’t sustaining loving, fulfilling relationships with men.

So I went to talk to my therapist. We did some work on the issue and I had a huge AHA! moment. I found that because my father died and left me when I was only 6, and my mother re-married a man who was an ultraviolent pedophile, I distrusted men and kept them at a distance. It wasn’t the men’s fault necessarily; it was my own perceptions that created the distance. A few weeks after my breakthrough, I began to notice more love, more genuine feeling between myself and my male friends. The love had always been there. I just had to let it flow.

So when you are feeling unfulfilled in some aspect of your life, ask yourself the question, “Am I blocking my own success?” or is it a case of “All You Need is Love?” I suspect it may be both, because before we can access all the love we need, we have to unravel our own resistance to fulfilling our heart’s desire.

“Should you perceive a problem, you surround that problem with love. You define it in love. You recognize that it is caused by the lack of love that lies behind all problems. And with love, you introduce the understanding that provides the solution.”  -Ken Carey