I Love Lucy, Too

Last Saturday I enjoyed speaking and signing books at Book Soup in West Hollywood.  One of the attendees was author, Michael Stern, who has written a book called I Had a Ball: My Friendship with Lucille Ball

which is about his early life relationship with Lucille Ball, the star of Yours, Mine and Ours

. Michael shared with me that when his family moved from a town near Winnipeg, Manitoba, Canada, to the San Fernando Valley area of greater Los Angeles, he watched the movie Yours, Mine and Ours and was immediately taken with Lucille Ball. Through one of those amazing and wonderfully fated sequences of events, Michael met Lucille Ball and ended up working for her. (Watch and listen to a YouTube Interview with Michael Stern.) 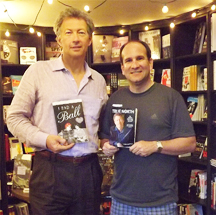 When she was alive, Lucy referred to Michael as her “very greatest fan” (page 219 of I Had a Ball). One of his concerns was that I might say something unkind or derogatory about Lucy. In our conversation I assured him that no such thing would happen during my presentation about my book, True North – The Shocking Truth about “Yours, Mine and Ours.” In fact, I told Michael that I have only good things to say about the film.  It was heart-warming, funny, entertaining hit movie which portrayed a family dynamic that I can only wish had been my experience as a child in the real life Beardsley household.

When I have watched the movie, it has been from an objective perspective, as though I was not connected to it. There is nothing wrong with the film and there are many things right with it.  The character of Frank Beardsley, portrayed by Henry Fonda, was a loving, caring, wise and even tempered father figure. Lucy, as my mother, Helen North-Beardsley, was her wonderful self; funny, clever, and perfectly suited to the slapstick scenes included in the film.

The reason that some of my siblings and I referred to the movie as “the big lie”, was not the fault of the film.  The difficulty came from the effort by my mother and stepfather to promote the image of the family in the film as their own.  What was a problem for me and many of my siblings was the assumption in our community of Carmel, California, and in the minds of movie audiences all over the country and the world, that the real life Beardsley family experience was similar or identical to the movie they saw on the big screen.  It was assumed that we were all living a life of harmony, we were all celebrities, and we were rich and living happily ever after.

My experience was so different from the film that I could not reconcile it in any way at all. As a boy I remember an incidence where I listened to a little girl at the baseball park near my childhood home say to me, “It must be wonderful to have such a big family! And to have all the attention you get from the movie!”  I just stared at her and moved away, mumbling something like “Yeah, sure.”

No one in the community knew that horrific domestic violence and child abuse was an almost daily event in the Beardsley household and that the children were miserable and fearful for their safety much of the time.  My childhood friend, Harry Goulding, who also attended the book signing at Book Soup, shared with those in attendance that until he read True North – The Shocking Truth about “Yours, Mine and Ours” he was unaware of the circumstances in which I had grown up. He said that he had always felt that, “Frank Beardsley was a mean man, and I didn’t like him”, but that was the extent of his knowledge of our abusive household. The added weight of hiding the shame from everyone, including one of my best friends, was way too much for any child to have to bear.

So, rest easy Michael. I also enjoyed “Yours, Mine and Ours”.  It was a fun and funny movie and will always be. For the record: I Love Lucy, too!