Thomas R. North was born into a military family visited by tragedy when Tom was just six years old. His father was killed in the crash of an experimental jet aircraft, leaving Tom’s mother with seven children and one on the way. His mother, Helen North, moved from Washington state to California and married another military officer, who turned out to be ultra-violent and a child molester.

After his mother remarried, Tom North grew up in Carmel, California, and his book captures the grandeur of coastal central California. Having spent his formative years in the forests of the Pacific Northwestern U.S., Tom was guided to seek solace and sanity in nature, and later, in Eastern Meditation.

He became a successful financial advisor, writer, poet, and adventurer. He is married to Connie North and they have two daughters. Tom has written extensively about scuba diving, jade hunting in the wilds of Big Sur, and spiritual topics as well. He is working on his second book, The Economics of Spiritual Transformation.

To book Tom  North on all media and for speaking engagements, please send email to:

Tom North appears on radio and television programs, and is a keynote speaker at colleges, universities, professional organizations and book signing events. (Check back often for updates.)

My mother and father, Helen and Dick North. 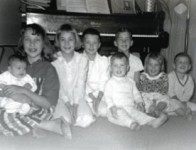 My siblings - the North children.

Lucille Ball and entourage appear at the movie premier in Monterey, California.

Lucille Ball poses with child actors who played the Beardsley children in “Yours, Mine and Ours”.